I knew that any exploration to Antarctica would be scenic. I also knew it would be more challenging than any other adventure that I have taken. The two-day voyage through the Drake Passage would be difficult, the weather would be harsh, and there would always be imminent danger on land as well as at sea. There would be no medical personnel with us and evacuation, if needed, would depend on helicopters and cooperation of the weather.

The adventure began in Ushuaia, Argentina which bears the nickname “fin del mundo”… translated as the “end of the world!” Provision was made with an outfitter for renting rain pants and parkas there and off we went… 65 explorers from 14 nations on an adventure of a lifetime.

Weeks prior to leaving for South America there were petty serious videos on Facebook of boats being tossed around like toys in the violent Drake Passage. My experience in the Passage was no different from those videos. And once ashore, slippery rocks covered with ice, snow and penguin poop were everywhere making walking treacherous in the cold, wind-swept Antarctic continent.

Our tiny boat “Ushuaia,” a converted, double hulled National Geographic exploration vessel, became our home to confront the elements during the 9 day journey from Ushuaia, Argentina to Antarctica and return. On board we received important safety briefings including how to dress in 5 layers, staying warm and dry, being fitted for our Wellingtons (boots for “wet landings” from the Zodiacs), and receiving life vests.

Initially, sailing through the Beagle Channel from Argentina was uneventful and calm. However, going into the Drake Passage, where the Atlantic and Pacific Oceans collide, things changed rapidly as the complimentary bottle of Malbec quickly rolled across the cabin floor and back again! Now the safest place to be was in bed and to ride out the roller coaster!

Over the ensuing 48 hours Dramamine proved to be invaluable to prevent motion sickness as the boat rocked violently side to side. Full-window sea views rapidly were replaced with full views of the sky, back and forth while going up and down 35 feet! Food was terrible onboard including pasta. I often thought it was intentional to serve pasta as it was easy to clean up when many began to puke from the boat’s lurching and rolling.

Going to the bathroom on the Ushuaia required ballet skills or otherwise you might find yourself going head first into the shower! Shaving was too dangerous while in the Drake Passage so my and the other grizzled male passengers beards grew until it was safe to shave again following landfall. Once, In the Passage I fell backwards into the shower while pulling the curtain onto me. Yes, travel in the Drake Passage was violent and dangerous. 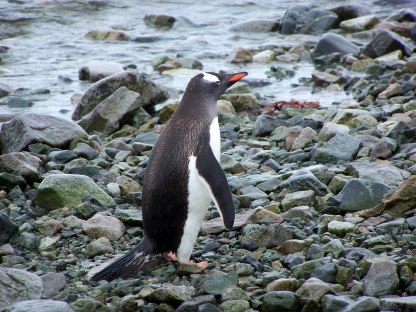 Penguins Near Camara Base in Antarctica

Finally, our tiny exploration vessel made landfall among penguins at Half Moon Island… not yet the mainland which was to come but for certain we were now in the Shetland Islands of Antarctica. Following on-board environmental briefings about the animal habitats and safety checks, we dressed to go ashore to visit Argentina’s Cámara Base.

Dressing for shore excursions is an experience designed to keep warm and dry. I wore three pair of socks plus toe warmers. In addition to my normal underwear I wore silk long underwear, jeans plus rain pants. On top of my tee-shirt I wore silks, Winter shirt, fleece pull over, hooded pull over, parka and life vest. I wore Wellingtons on my feet, two hats and waterproof Arctic-grade gloves with finger warmers. It always took considerable time to get dressed for a landing and usually required a half hour to don my attire to go ashore. I was plump like the Michelin Man.

The landing on Half Moon Island was by an inflatable Zodiac motor boat and required that we wade a short distance to a stony, snow-covered beach. We arrived in the middle of a penguin colony and took a difficult hike through ice, snow, penguin poop, and a multitude of rocks to journey only an exhausting half mile to Cámara Base. The twelve men in the station are rugged souls performing scientific measurements and analysis. They stay in their tiny quarters twelve months before rotating out. After visiting the station, it was great to return to the ship to shower and shave especially since shaving wasn’t possible earlier due to the sea swells.

Our next destination was Paradise Bay and Argentina’s Brown Station… truly on the Antarctic continent mainland. Paradise Bay is protected from bad weather by thick glacial ice atop mountains. 19th and 20th century whalers often took refuge there, finding it to be a paradise from the treacherous storms in the area.

In 1984 the station crew was told they had to stay an extra year. One might imagine looking forward to leaving such a desolate place. When told of not rotating out a member of the crew burned the station to the ground. The crew was rescued and taken to the United States’ Palmer Station.

Temperatures in Paradise Bay were comfortable inside our layered garments. When the wind picked up and transit from ship to shore by Zodiac really made it feel very frigid. However, all those layers of clothing paid off and we remained warm but a bit restricted due to the bulk.

The next visit ashore was Vernadsky Station which is operated by the Ukraine. There are eleven men there who primarily monitor ozone levels and Antarctic temperatures. These male scientists are quite secluded most of the time and are eager to meet women from the summer tourist ships. Tradition has it for women to deposit a bra at the bar at Vernadsky and the station boasts about its collection and their sole drink called “Vernadsky Antifreeze,” otherwise known as Vodka. These scientists have been at the forefront of monitoring ozone levels in Antarctica where recent improvement has been observed.

Icebergs were numerous and beautiful throughout the Antarctic exploration. Our expedition leader took us on a Zodiac through a huge ice field. The icebergs were awesome and many had deep blue hue to them. Numerous seals and penguins were always present. They had no fear of humans and they often walked within arms length.

Sometimes there are some people who are willing to do something that they would otherwise immediately say something like “*#?*#… NO.” There was one such experience on this adventure called the Antarctic bath.

I will set the stage for you… It was snowing and the water temperature was barely above freezing. In about four weeks the water would freeze. Regardless, the expedition leader offered a swim to anyone wanting to go into water just above freezing. Sure enough there were people stripping on the beach to their minimum essentials and jumping in! This wasn’t a thermal pool! It was Antarctica and these are not people from “polar bear” groups. I am often amazed at things people will do and this is certainly one of them.

On the final day in Antarctica, another tourist ship, the Polar Star, hit an uncharted rock near Deception Island. The incident occurred not very distant from our location and we learned later that it was reported around the world. Our itinerary was immediately changed as the Polar Star was taking on water and passengers were to be rescued by our and other boats in the area.

Taking on passengers from a disabled vessel caused me to reflect on the dangers of this adventure and how fragile human life is both on land as well as at sea.

Enroute to Argentina and the safety of the mainland I remembered that the sea and the weather are unforgiving. The thrill of the adventure sometimes clouds ones judgement and there is often a false sense of security. A boat taking on water, a fall in the boat cabin, a slip from a cliff were always possible. Life in Antarctica is extremely harsh to humans but in the end we did stare physical danger in the face and survived with tales to relive for the rest of our lives.

7 thoughts on “Adventure to Antarctica!”