A few years ago I traveled to the Czech Republic city of Brno. Within a few blocks of my apartment the story of the past 900 years of this part of the world is preserved… not only in stone but also in legends and the cultural traditions of the people there.

Brno is located north of Vienna, Austria. It is a small city of about 500,000 people and is accessible by trains and busses that run between Vienna and Prague. Many tourists just see Brno as a waypoint between these more famous places. Little did I know when I initially arrived that I would find myself staying in Brno’s old town for seven months including a frigid, blustery winter. Living in Brno provided me with a different perspective than a tourist may get.

This blog story is based on a small geographic portion of the city… my neighborhood… and the legends, history and traditions that are preserved there.

I learned from Louisa, the present-day owner of my apartment, that her father had owned an entire neighborhood complex of interconnected medieval buildings which were constructed in the 14th century. My apartment was in one of them.

Louisa’s father in the 1930’s foresaw the impending doom for Czechoslovakia and evacuated his family to London where Louisa lived during the NAZI take over and World War II. Her parents died and following the war Louisa returned to Brno to find that she had to fight the government supported by the Soviet occupiers in legal processes to reclaim her inherited properties.

Although much of her medieval structures had been severely damaged by Allied bombing, her neighborhood near the site of the original “Brno Gate” in old town had been saved. From my living room window on the fourth floor I had a magnificent view of the old Town Hall across the three meter street and its clock tower constructed in the 12th and 13th centuries.

There are several legends in Brno and the first I encountered (and found to be most interesting) is in the old Town Hall. In the entrance way is a huge, preserved ferocious-looking crocodile suspended from the ceiling. Because the residents had never seen anything like it, the crocodile was called the “Brno Dragon.”

Dragons are in folklore everywhere in Europe and I have written about dragons in Zagreb previously. However, in Brno they have a physical creature! The local story of this beast is quite interesting.

The legend is that in medieval times the dragon menaced the townspeople and their livestock from his lair in the River Svratka. A reward of one hundred gold coins was offered to anyone who might relieve them of the creature.

It is said that a transient butcher killed the dragon by enticing him to eat an animal skin bag filled with lime. Once the dragon washed it down with river water, the lime expanded and the creature literally blew up. Then he was preserved and hung where he is today. A crocodile in this area of Central Europe is highly unlikely but the legend and the monster make a fine story to tell visitors. Stopping to see the dragon is an essential for parents as children are fascinated and stare in awe at the “dragon” when the tale is recounted.

Another interesting tale found at the Town Hall is the crooked, twisted, decorative central spire on the entrance wall. It seems that the town elders were not pleased with the work being done by the architect with the entrance spire decoration so there was a disagreement about payment. The architect intentionally instructed his masons to twist the middle spire and make it crooked to forever leave his mark on the town and a message about how he was treated.

Near the old town hall, next to my apartment, is the site of centuries-old “Upper Market.” The market is open daily where people buy fresh fruits and wonderful vegetables grown nearby or imported. I liked going there to take colorful photos of the merchandise as well as to purchase fresh items to eat.

To one side of the market is Petrov, a rocky high mound where the Church of Saints Peter and Paul has been constructed. There is a historic tale about ringing the bells at this church which I will describe later.

Not far from Upper Market and my Brno apartment is Freedom Square (Náměstí Svobody). If one is ever searching for a crazy party in Brno it is certain you will find one here, almost any weekend… in the streets! There are often musicians and dancers performing here. Freedom Square and the Upper Market are where the annual outdoor Christmas markets are held in Brno from the 25th of November until Christmas.

In the Christmas market are nearly a hundred specialty shops in small wooden huts where local crafts people and vendors sell exceptionally made items and quality foods at very reasonable prices. The photos below are from the Christmas market and show some of the special homemade goods and fresh food for sale. 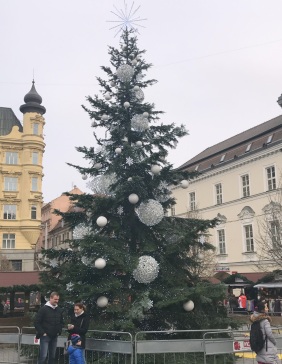 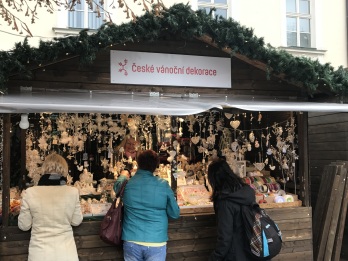 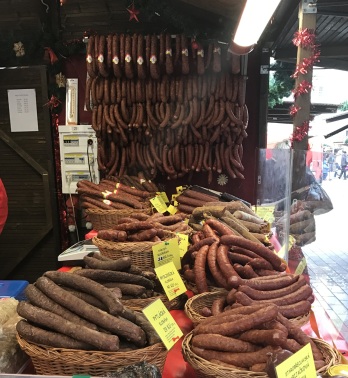 Of course, any Czech celebration would be incomplete without an abundance of warm mulled wine and cold beer with traditional foods including cheeses, pastries, sausages, potatoes and cabbage delicacies.

Food at the markets is cooked in large vats. The smells of cooking pork with onions and peppers waft over the entire area. They are incredible and make your mouth water. It wouldn’t be a Czech celebration without exceptional food and drink.

Also in Freedom Square is a large, modern “chronometer”… a clock. I have not found out how to determine time from it yet. The shape of the clock always creates interesting discussion by visitors and local residents. What do you think it looks like?

In traditional time reporting across Europe, town bells ring on the quarter-hour and hour. People depended on the bells to know when to attend church services, begin and end the workday, and so on.

There is an interesting story about the bells ringing in the Petrov church. To this day, the Petrov church bell rings twelve times instead of eleven at 11:00 am. This curiosity isn’t intended to confuse tourists but rather is a peculiarity based on an embellished historic fact.

During the Thirty Years War, Brno was defending itself in 1645 against a siege by Sweden. After the siege had been going on for three and a half months, the Swedish commander proclaimed that he would capture the city before the cathedral bells on Petrov rang midday. The leader of the defending army learned this and had the bells rung 12 times at 11:00 to trick the Swedish army. Subsequently, the tale is that the Swedish army had been fooled and retreated without a shot being fired. To commemorate this end to the siege, the cathedral bells have ever since been rung 12 times at both 11:00 am and noon.

Brno is an interesting small city. It sometimes seems to me to be overlooked because it is between two beautiful, huge cities, Prague and Vienna. While I lived in Brno, legends of dragons and traditions for ringing church bells came alive within a short walking distance from my apartment which was in a medieval building with views of structures hundreds of years old. Shaped by traditions, legends and wars, Brno provides interesting insight into culture of the Czech Republic and is a wonderful place to visit and live.

Want to visit and blog about Brno? If so, here is an offer for free accomodations. Follow