In the past several years I have traveled throughout several European countries and grew fond of really great coffee. I believe that most people have not experienced the aroma and smooth taste of truly great coffee.

It isn’t that I think of myself as a connoisseur or an advocate of beans from specific places throughout the world. I also don’t believe I am a snob because I rather enjoy a cappuccino or a latte than a cup of black Americano.

This story is about exceptionally great coffee with a particular emphasis on cafes and coffee in Europe. Like the one in this photo inside Cafe Konditorei in Vienna, Austria, many European cafes sell delicious pastries along with exceptional coffee. Fantastic coffee, pastries and food are also found at the famous Cafe Central, also in Vienna

Coffee in the USA, except at Starbucks, is brewed to the tastes of the local population. For example, coffee in San Francisco seems to me to taste like it comes from Italy, while in New Orleans, chicory has invaded the brew, and in the mountains of Western North Carolina (where I now live), local coffee brewers make a very bold cup of joe.

While I was in the Army, coffee was always horrible! Woe be unto anyone dreaming of cleaning the inside of a coffee urn in an Army mess hall. There, the coffee had character and really was undoubtedly “Army strong.”

Starbucks is everywhere in the USA and many places around the world. One distinguishing characteristic about Starbucks is the consistency from one shop to another.

Pumpkin Spice Lattes and all other java drinks in any Manhattan, New York Starbucks taste precisely the same as any found in Sarasota, Florida or San Diego, California. On a 1 to 5 scale (5 being the very best), Starbucks likely would just make a 4 while the brews rating 5 are easily found throughout Europe.

I must admit, however, that there are coffee drinks throughout the world where the brew takes on special characteristics. In the Caribbean, South America, and Western Asia I have sworn off coffee… Stirring spoons might stand on their own in the black brew the local populus calls coffee.

But this story is more about my coffee experiences in Europe and the consistent superiority of java there. On the continent I have found really great cappuccino from fancy espresso machines that cost a small fortune. There you will also find baristas who introduce you to the beans from around the world and their special roasting processes.

In Lugo, Spain along the Camino Real adjacent to intact ancient Roman walls I have enjoyed a most wonderful cappuccino with a beautiful layer of chocolate on the bottom and snowy, fluffy cream crowning the cup. At the bakery Dona not only is the coffee exceptional but also are the pastries as pictured.

On the 5 scale of truly great cafes, Himmels in Wolkersdorf, Austria; Kaffeine in Budapest, Hungary; Let’s Coffee in Cluj-Napoca, Romania; Kafec in Brno, Czechia; Le Petit Cafe in Ljubljana, Slovenia; and Mint  in Sliema, Malta are exceptional.  Along with a sweet pastry the coffees are very satisfying and the total price is usually less than 5 USD!

In addition to Himmels in Austria, a train ride to Krems an der Donau for apple strudel with a whipped cream-topped latte at Cafe Conditorei Raimitz is divine but costs about 7 USD plus train fare to go there. (Note: a photo I took at Raimitz is the marquis photo for them on TripAdvisor).

As I mentioned above, I presently live in the North Carolina mountains in Hendersonville. Coffee drinks are strong here but I have found the Appalachian Coffee Company can serve a good cappuccino with a solid 4 rating (and their scones are awesome).

Many believe that the beans or the roasting of them or the espresso machine make the difference in good coffee. Undoubtedly, they are important.

However, I have found that the real differentiator is the baristas who are craftsmen who make the difference in conceiving really great coffee.

Those baristas who learn about your coffee taste and smell preferences select beans and have their unique roasting methods that truly craft a spectacular coffee creation. That is what differentiates their coffees from all others and makes them great!  Elsewhere, the baristas are amateurs when compared to coffee artists (pictured below) such as Vasilie at Let’s Coffee and Ludwig at Himmel’s. 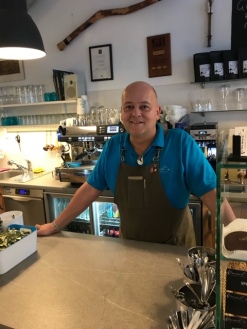 On your next visit to get your enjoyable coffee brew, seek out those that serve spectacular coffee. The barista who caters to your tastes will be the one to brew a spectacular cup of joe that will be memorable, similar to those I have mentioned.

Have you had a special cup of coffee anywhere in the world? If so, send me a reply using the comment section in this story and tell me about it and why you enjoyed it,

5 thoughts on “Throughout Europe with Excellent Cappuccino”