Last week my nomadic exploits took me to London and Brussels. I really didn’t plan the trip like I usually do… I just went! After all, I reasoned, how much difficulty could I really encounter in London where I share a common language… sort of?

I often read others’ blogs about the exotic places they visit and I suppose that the most exotic I have read about the U.K. are stories written about the wilds of Scotland or Wales. I have been to London several times. Therefore, this story is less about “exotic” and more-so about bits and pieces of my experiences on this nomadic journey.

On arrival at the U.K. border at Gatwick Airport I responded to the officer’s questions. One caused a slight pause when asked if I “had” relatives in the U.K. The word “had” is the past tense so thus my reply “well, a long time ago.” The officer didn’t find this particularly amusing. I could envision her mind whirling that she was so lucky to have one more American in her queue so I quickly responded that I have none. That proved to be satisfactory. 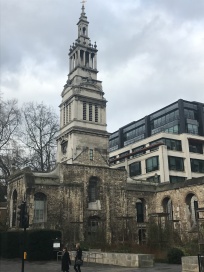 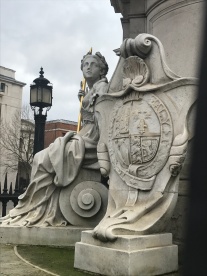 In my “nomad without a plan expedition” I decided that taking photos was my primary objective. While walking to Saint Paul’s Cathedral I saw several old or decaying structures. These architectural relics are beautiful and I am sure there are many of them in this old city. I hope that somehow their beauty will be preserved. 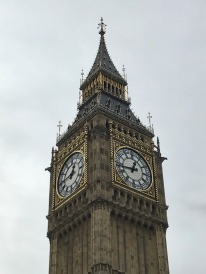 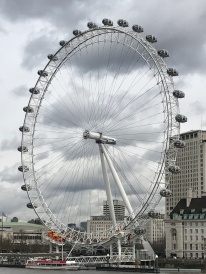 While out-and-about I walked among the special places in Covet Garden, Piccadilly Circus, the London Eye, Trafalgar Square, Big Ben, the Ministry of Defence, and the West End Theatre District to see “Jersey Boys” once more. One can never get enough of the Four Seasons!

Big strides have been made in British cuisine since my prior visits and I greatly enjoyed eating at some really good restaurants which I have reviewed in TripAdviser. I did visit the St. James Park but didn’t stop at Buckingham Palace as it was once more raining like the last time I was there years ago. I did travel all over London using the Tube and was able to make my way through the city with ease.

While in London, I decided my next stop on the way back to the Czech Republic would be through Brussels, Belgium. Why? Because I had never been to Belgium or maybe it was because I liked Belgian chocolate, wanted to eat Belgian waffles, or drink some Belgian beer.

Belgians are really serious when it comes to waffles, chocolate and beer and I wasn’t disappointed. I had not just any chocolate on my waffle! No siree! I had real Belgian chocolate on my real Belgian waffles and admit that the taste was really great! At lunch I had traditional stewed rabbit and a nice Belgian beer.

While in Brussels I took a Hop on – Hop Off tour and visited several city sites. The most memorable was a remnant of the 1958 Brussels Exposition at the oddest building I have ever visited… the Atomium.

This structure is designed to represent an iron crystal magnified 165 billion times. It is 102 metres (335 feet) tall and the spheres contain observation windows, a restaurant, and a museum. There are escalators and stairs in the connecting tubes between the spheres. City views from the Atomium are very good.

To get from London to Brussels I also had another new experience. I decided to get there by a 7 hour bus trip that cost only 17 Euros (about $18). Recalling grade school geography, I knew that the English Channel is between England and Belgium so I figured that the bus would get there by ferry or, if I were lucky, through the Eurotunnel… the Channel Tunnel. Fortunately, the trip was through the 32 miles of “Le Tunnel.” Once through U.K. and French border control, the bus pulled right into a windowless railcar for the short, 35 minute trip. It was a unique experience and certainly not one for the claustrophobic.

On returning to the Czech Republic I opted for a 13 hour bus trip leaving at 5:00 am. Competition between bus companies is fierce in Europe. Subsequently, prices are low and comfort is reasonable. WiFi connectivity is almost always available. The travel through Western Germany was wonderful with beautiful villages and rolling hills with evergreens along the way. Despite being a long trip, time passed quickly as I returned.

In the end, my week-long expedition without a plan was a good one, filled with new experiences. I am wrapping up my stay in the Czech Republic next week and after a visit to the USA I will return to Europe to live in Malta for my next adventures.