By chance one day in 1833 France Prešeren and Julija Primic met at church. France, who led a fairly unhappy life, was infatuated with her and quickly knew that he loved this young, female vision.

France thought he would surely win Julija’s love. But her feelings and his were not mutual. There were complications including their economic status… he was a modest poet and aspiring lawyer and Julija’s family was wealthy. Even more problematic was that he was 33 and she 16.

Years passed following Julija’s and France’s initial meeting and France found his attempts to win her over to be futile. So somewhere around 1838 he met Ana Jelovšek. Even though they did not marry, they had three children. According to local lore France was a heavy drinker and also had several love affairs while living with Ana in Ljubljana (then in the Austro-Hungarian Empire).

France traveled a great deal, particularly to nearby Lake Bled where he was inspired by the natural beauty to write his poems including ones based on his unfulfilled love for Julija.

After many years struggling to be authorized to be a lawyer, France was finally permitted to practice law in 1846 but died just a few years later. His dismal, sad life had many unfulfilled moments professionally and personally. It is only after his death that his works and he have become endeared to the hearts of Slovenians.

Prešeren Square in Ljubljana is named for him. A statue of France is also in the square to memorialize him and his works as Slovenia’s national hero… not a military general or statesman but rather a romance poet is the country’s national hero.

Just as he led a life filled with controversy, Prešeren’s monument also has been controversial.

Atop the monument is a topless muse which the priest of the nearby church tried to keep covered only to see his efforts undone each time. Finally the priest had trees planted in front of the church and to the side of the statue with hopes he could shield his parishioners seeing her.

My story about France and Julija isn’t finished yet. On his deathbed he proclaimed his unending love for her.

The tragedy of this unfulfilled love is remembered even now as across the Prešeren Square a memorial to Julija is in a window. The couple’s silent gaze is forever fixed directly on each other. 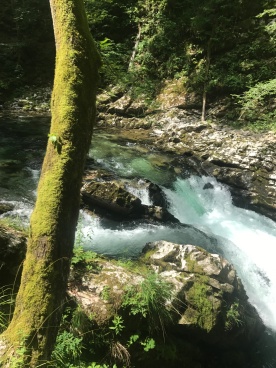 9 thoughts on “An Unfulfilled Love in Ljubljana, Slovenia”