You have likely heard it said that travel provides one of the best educations one can get. I believe it! I have been exploring Europe for the past two and a half years and I am appreciating the education so much but even more so in Malta where I am on information overload for the history, culture, and beauty that are flooding my senses!

The Mediterranean Sea frames life in the Maltese archipelago. From the sea to the land one finds the historic importance of this tiny place, the ways that the culture has been impacted, and the utter beauty that is attracting so many to want to live here.

This story is my second one about my adventures in Malta. In this story I provide neither a chronological report nor every detail of my adventure. As you may know, I only blog for myself… my audience of one. However, what I write may entice you in many ways or whet your appetite to learn more as I reveal snippets through words and photos of the education I am experiencing.

In my initial blog story about Malta I described the fabled shipwrecks in the Maltese Islands involving Odysseus and Saint Paul. The shipwreck described in the Odyssey is woven into the folklore fabric of Malta and the story about Paul in the Bible book of Acts of the Apostles provides a foundation for the expansion of Christianity in Malta during the first century.

The Maltese islands are in the center of the Mediterranean Sea and they have long been strategically important since being inhabited around 5000 BC. They have been invaded and fought over by a “who’s who” of peoples and great civilizations of the time… Romans fought Carthaginians, the Knights of Saint John faced Turks, and the Maltese fought Napoleon’s Republican army. And there have been many others in Malta through the centuries.

Hitler’s Germany and Mussolini’s Italy tried to take the islands be siege and bomb the islands into submission in World War II. Somehow the Maltese people withstood an incredible 154 days and nights of continuous bombardment with 6700 tons of ordnance dropped on them! The Maltese never gave up. They were awarded the George Cross for heroism by King George VI. The cross is displayed on the Malta national flag. 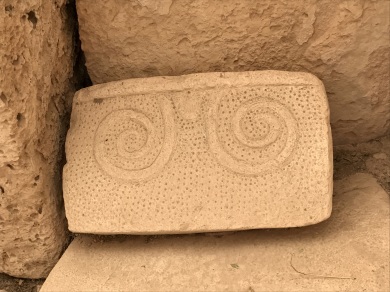 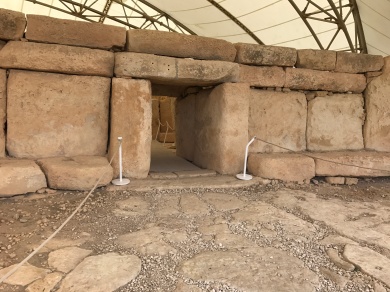 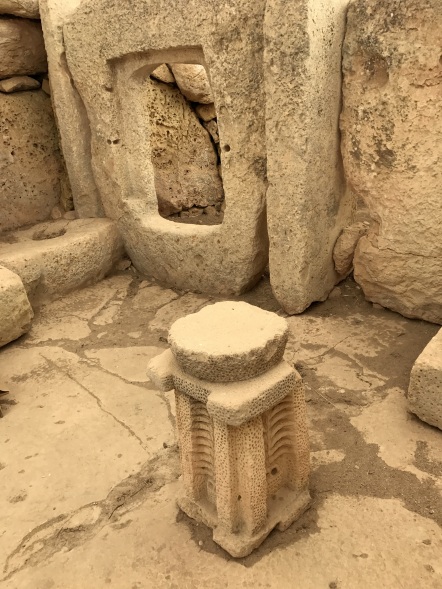 The remnants of beautiful prehistoric temples overlook the sea at UNESCO World Heritage Site at Hagar Qim (pictured above) near Qrendi. They date back to 3500 BC… older than Stonehenge in England and the Egyptian Pyramids! And cities with Arabic-sounding names like the Ir-Rabat and the walled city of Mdina remind us of a time when the islands were dominated by the Moors. Emblems of the Knights of Saint John are found throughout Malta and recall the 268 years when the order ruled the islands.

Among historic facts, Napoleon invaded Malta and France became an occupying power. In World War II General Eisenhower led the invasion of Sicily from Valletta, the capital. The Romans established themselves on the Malta island with some scattered reminders of their influence remaining in Valletta and elsewhere. The British influence is obvious from things like the electrical pugs, phone booths, store names, and driving on the left.

Today, invasion is an economic one. Russians and Eastern Europeans are moving to Malta and there is a tremendous building boom underway which includes new structures and renovation of older properties.

Some things seem to have lasted through the ages. The sea provides the means for survival and commerce. One can imagine the fishermen bringing in their daily catch just like they do today in Marsaxlokk.

Just as they have for ages, traditional net fishing yields the bounty from the sea. The smells brought in by a breeze in the fishing village are easily identifiable with the seacoast. In Marsaxlokk there is a blend of traditional delicious Maltese foods with additions from Sicily and Arab countries.

Malta is the land where the colorful fishing boats have eyes (as shown in the photo at the beginning of this story). The Eye of Osiris on the boat bows are for good luck for the daily catch and for safe return from the sea.

I have met several Maltese natives this past week. The ones I have talked with are happy to share their stories and tell you how much they love the islands. One such person was Francesco who drove me in his “taxi” one day.

Francesco is quite the character! He had me singing Sinatra’s “New York, New York” with him as we rode along back roads on Malta. He honked the car horn at every woman he saw. Finally after driving around an hour my memorable “20 minute ride” with him was over but I know that I will be revisiting many of the places he showed me to get more details about them and I will blog about them in upcoming entries of my continuing adventure in Malta.

Meanwhile, I have collected many photos that I have not incorporated into this story so I am saving them here in a slide show.

5 thoughts on “My Maltese Adventure Begins!”