Dragons, along with St. George slaying them, are a common theme for statues in the Central European countries I have visited. I have previously written about my observations in “Slaying Dragons in Zagreb” and I have discovered additional fierce dragon statues in Austria and Romania. So, I wasn’t particularly surprised to find dragon images in Ljubljana, Slovenia. However, what surprised me was the extent of the emphasis on dragons and the absence of George.

On “Dragon Bridge” four fearsome statues were my first observations in this medieval city. The dragons are interesting works of art and are the “most photographed” item in Ljubljana, hands-down.  The bridge is one of several across the Ljubljanica River in the city.

Stories about the dragon’s origin as friend or foe are contradictory in Ljubljana (“LJ” for short) but who cares? Dragon Bridge is interesting and you really can’t leave without taking lots of photos of the dragons!

The dragon theme is everywhere in the city from the tops of the manhole covers, automobile license plates, and appearing above a castle image on the city flag. Dragon merchandise overflows in every souvenir shop in LJ

Although dragons are an interesting aspect to the city, there is much more to LJ. It is a favorite tourist stop in Slovenia since the breakup of Yugoslavia.

Tour groups, cyclists, and back packers… people of all ages from all over the world come to LJ to enjoy the whimsical street performers; excellent food, wine and beer; and the beautiful historic city architecture. They also come to LJ while visiting nearby attractions such as Lake Bled or Slovenian gems including Piran on the Adriatic Sea coast.

Legend has it that Jason and the Argonauts from Greek mythology joined the early inhabitants that were already living along the Ljubljanica River and founded Ljubljana. Dragons came with Jason, so they say, and took up residence along the Ljubljanica too. Regardless, as with many other places in Europe, Romans left their mark in this area with their settlement of Emona, the predecessor to LJ.

As the city evolved through the centuries LJ many times found itself in the cross-hairs during several wars. Several nations and dynasties have laid claim to LJ… among them were the Habsburgs. The Dragon Bridge actually is in honor of Habsburg Emperor Franz Josef when today’s Slovenia was part of the Austro-Hungarian Empire prior to World War I.

Church of the Annunciation 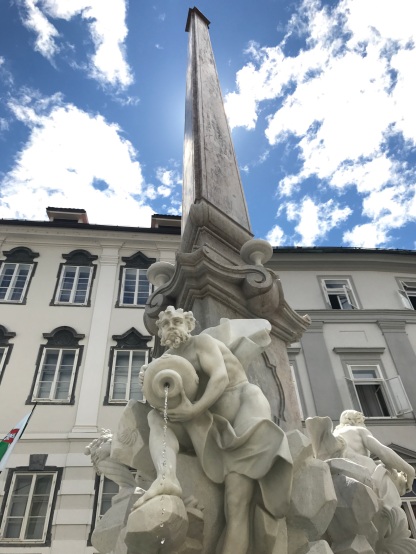 Historic Ljubljana is a compact city. Monuments and historic buildings mostly were built in the 16th to 18th centuries. These include the pink Franciscan Church of the Annunciation located in Prešeren Square (named after France Prešeren, a poet and national hero) and the Robba Fountain.

The restored medieval castle overlooks LJ and it is said that this is where the Ljubljana dragon has his lair… some believe that the dragon protects the city but I believe it is an excellent lookout to survey for his next feast. From the castle one can see the Kamnik–Savinja Alps beyond the city.

From this perch the dragon can see the entire city and his prey at popular bars, restaurants, ice cream stands, and cafes such as Le Petit Cafe, my favorite for amazing Eggs Benedict and delicious caffe latte. And I have limited my visits to only Sunday mornings so I don’t get too plump and attractive as a dragon snack.