Years ago I was intrigued watching an historic church’s cemetery being removed. Although I knew nobody buried in this particular cemetery, it saddened me to think that a parcel of land deemed to be sacred as a “final resting place” for an earthly body had been identified as being more useful to those above ground.

It was even more striking to me when it became apparent later that the need to reuse the cemetery plot was for a parking lot for a Burger King.

I had long forgotten about this particular occurrence in my life until recently I learned of an even more dramatic (at least to me it is dramatic) similar event which occurred in Hendersonville, North Carolina, where I now reside.

Hendersonville is in the southern United States in the area sometimes referred to as being part of the “Bible Belt.” The Bible Belt refers to the devout population of conservative Protestant Christians that play a strong role in society and politics here. In this population are found families that have contributed to the fabric of society for many generations. 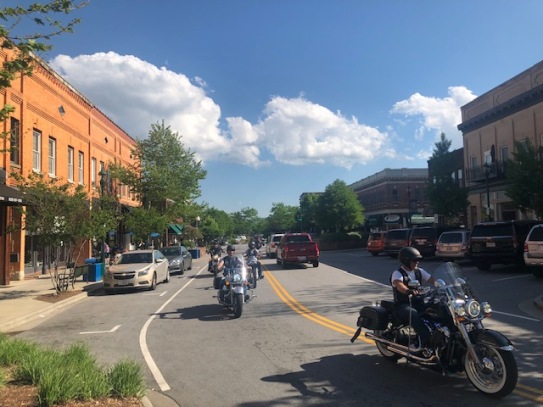 One of the contributions is the number of churches within the Hendersonville borders. To say that there are numerous churches in Hendersonville and the surrounding area would be an understatement! There are few places within the town limits that don’t have at least one church nearby. So it was surprising to me to learn that these churches inside the town limits have no cemeteries.

On learning this I was not only surprised… I was stunned! Churches and cemeteries are quite often found together or often a cemetery without a church associated with it has a name that points to a past when there was also a church there at one time.

So how is all this reconciled? In 1883 the town elders decided that all cemeteries within the town limits would be closed and that those buried in them would be relocated to a new cemetery. In 1885 the Oakdale Cemetery was formed in Hendersonville and the process was begun to relocate to the new cemetery.

This resulted in several exhumations and, in some cases, only moving of headstones and, in some cases, total abandonment of graves to any purpose including parking lots, and, in at least one instance, removal of headstones and placing a solitary marker (without inscription) to remember those buried in the previous cemetery. It is an oddity in Oakdale Cemetery to find headstones with dates of death prior to the formation of the cemetery!

I have not yet determined why this action was taken. As soon as I know why I will edit this story with an update.

Oakdale Cemetery is an interesting place. It is the current resting place for more than 5000 people, many of whom have made significant contributions to local history and the development of Hendersonville. It is listed in the United States National Register of Historic Places.

Oakdale is a noticeable, obviously segregated, cemetery divided by an important US highway that runs through it. On one side is the white section and the African-American section is on the opposite side.