I extended my stay in the Austrian Wachau Valley where I am now exploring in and around the town of Melk an der Donau. Melk is at the beginning of the gorgeous Wachau Valley with the Danube River running through it. The Wachau extends about 35 kilometers down river to Krems. Melk is a small community of about 5000 and is dominated by the picturesque 11th century Benedictine Monastery, Melk Abbey (German: Stift Melk).

The Abbey is the principle tourist destination for the numerous Danube River cruise tours that tie-up here enroute from Amsterdam and elsewhere to Vienna, Budapest, and beyond. My apartment is in the older part of the town with the massive Abbey immediately behind me.

Overlooking the Danube, the Melk Abbey has a long history. It was founded in 1089. You can read more about the Abbey and the history of Melk here. For now, though, I am going to share with you some of my pictures and my observations.

The town has a rich history and the town government provides numerous placards (in German and English) throughout Melk that provide the tourist with a great deal of information about the early inhabitants, their relationship to the Catholic church, the influence of the reformation, the first ruling dynasty in Austria, the impact of World War II, the buildings, the town growth, and the flooding of the Danube in recent times as well as the recording of the massive flooding in 1501.

Melk is a chameleon. It takes on a typical tourist hot spot in the daytime as tourists flock to the Abbey. There are many places to have a coffee as well as a good wine and schnitzel. In the evenings, however, the tour groups from the river boats are mostly gone and those in town are residents and numerous bicycle riders who have stopped for the night.

Weekly there are band concerts with participants in traditional Austrian dress playing music on the Rathausplatz. This is when the community just sits back and relaxes with a large beer-in-hand and listens to the music and occasionally sings along.

Abbey tourists enjoy the massive old library, paintings of royalty and old world leaders, statues, and the beautiful artwork of the church interior. The Abbey is beautiful both on the interior as well as the exterior. With a bit of luck you can hear musical rehearsals which in themselves are spectacular. But for me, the exterior gardens are quite special and a place that is often overlooked by the tourists who are visiting with very limited time to absorb the grandeur of the Abbey, the town and the area. 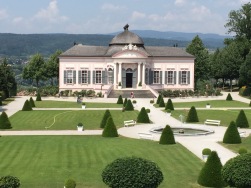 found in the garden woods is very special. The smell of evergreens add to this place high over the Danube River flowing by. It is an ideal spot for me to contemplate, listen to nothing except for a few birds and the breeze in the trees. It is a great place to relax in the shade… my next destination.

2 thoughts on “My Melk Holiday”