I have traveled to many places in the world and have been delighted everywhere by the people, beauty, and culture. Croatia, however, has really been spectacular and picturesque! I lived in Zagreb for a month and a half and visited a beautiful country which most Americans have little knowledge of. While I have written about Plitvička National Park, and Zagreb, the Croatian Adriatic Seacoast has several awesome sites that are certain to be added to bucket lists for world explorers.

Croatia declared independence in 1991 during the break-up of Yugoslavia. After that the nation was forced to fight a war with neighbors Serbia and Montenegro which had other ideas to keep the nation together.

Most explorers coming to Croatia arrive from Eastern Europe and Mediterranean countries. They enjoy the beautiful seaside cities with unique, colorful names such as Pula, Dubrovnik and Split. The explorers know great places to visit and  the history and beauty on the Croatian Adriatic coast are very inviting. I recommend that you put this country on your bucket list! This story is about my adventure to Dubrovnik and the nearby town of Korcula. This blog is about the enticing things I saw there as I was in awe of the beauty of these old cities and their stories.

First sight of the walled “old city” of Dubrovnik is from the road from the airport that winds from above on the mountain side. I knew immediately that I was going to enjoy this exploration! This spectacular view in the photo is the entire old city and the surrounding blue Adriatic Sea! It is beautiful as your heart melts in anticipation of the experience.

The view entices the explorer and absorbs your mind to learn more about the antiquity and enjoy the beauty created over the centuries in this UNESCO World Heritage site.

Tales of great sea battles against pirates, Venetians, and Turks are told with stories of thousands of casualties, prisoners and plagues. The city is proud to never having been taken! The formidable high walls surround the old city were built to thwart attackers… the city walls were never breached even though the city was devastated in the 1990’s by shelling from neighbors Serbia and Montenegro.

I walked for several hours atop the 500-year-old high wall and took many photos along the way. Portions of the city wall are pictured as well as views taken from atop it.

The city has a culturally diverse past. Romans inhabited this area in the fifth century and Poles and Russians arrived in the seventh. Each added to the cuisine, architectures, and religious affiliations (there are 46 churches and a synagogue). In the fourteenth through nineteenth centuries, “Dubrovnika” was an independent city-state.

Except for the main street, the walkways are narrow with numerous cafes and tourist shops. I stayed in a Airbnb inside Old City which has a night life-like many large European cities. Loud parties last almost till dawn in the narrow side streets. The next time I visit I will stay outside the pictured main Pile (pronounced “pee lay”) Gate. The food is great… Italian, Polish, Russian and Romanian! There are plenty of shellfish dishes too! Wines here are called white and “black” (instead of red) and are flavorful. 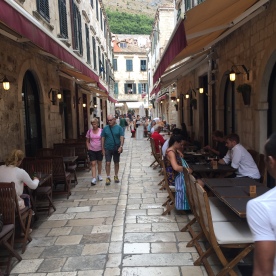 As an added adventure I journeyed to the nearby island of Korcula. Korcula is a tiny town accessible by boat. The scenery along the way is of grapevines and fantastic coastal views. The claim to fame in this town is the home of Marco Polo (pictured). In his time, Korcula was ruled by the Venetians.

As mentioned previously, this coastal area of Croatia is exceptional to explore. There are many more adventures in Pula, Zadar and Split which I must add to my own bucket list. I hope to meet you there too.