Many things in Budapest interest me. I find the history and architecture to be incredibly fascinating and portions of the city along the Danube River banks are gorgeous. The Parliament building is, in my opinion, the most beautiful building in the world.  And Chain Bridge, Matthias Church and the Royal Palace are spectacular sites along (or over) the river. It is no wonder that these banks of the Danube have been designated a UNESCO World Heritage Site.

The heritage in this rather small area involves several civilizations, violence, wars, and occupations. These are remembered in wonderful museums, statues in Heroes Square, or dark times at Terror House. The marks of these civilizations are found in many places in Budapest… not only in the art, music, and food but also in what is referred to as “taking the waters” associated with the numerous spas with heated water from thermal springs in the city and across Hungary.

I recently rode on Budapest’s original M1 underground metro to Szechenyi Baths.  The ride on the M1 “Millennium Underground Railway” is a treat itself. It is the first underground railway (built in 1894-96) on the European mainland. It is also a UNESCO World Heritage Site.

On emerging from the M1 one encounters a massive, elaborate building housing the Szechenyi Spa. The building was constructed prior to WW I and is sometimes referred to as the “wedding cake” because of its design. The hot water was discovered by accident while a well was being drilled in the late 1800’s and the water temperature directly out of the ground is an astonishing 76 degrees C (169 degrees F)!

The Szechenyi Spa is the largest medicinal bath in Europe with three outdoor pools and fifteen indoor pools that range in temperatures up to 38 degrees C (100 degrees F)! Ouch!

Medicinal waters across Hungary vary in their mineral contents. Water in Szechenyi is high in calcium, magnesium, and hydrogen carbonate and is said to be helpful for pains in joints, arthritis, blood circulation and disorders of the nervous system. Although I can’t vouch for the medicinal qualities, I can say that following my visit I was very relaxed. 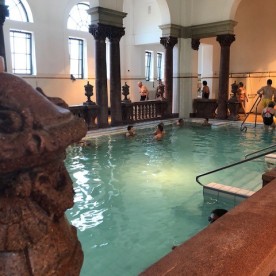 There are 125 thermal springs in Budapest and some date to Roman times! You can even find authentic Turkish baths in Budapest. Although residents and tourists often visit the spas for their ailments, the spas are also recreational… year round, even when the snow is falling, the pools are open! Some Hungarians also say that “taking the waters” at the bathhouses is the best cure for a hangover!

It was interesting to me that people were so intrigued with the spa. Sea beaches are pretty far from Budapest so a day at the spa is a “day at the beach” with families and friends gathering for fun and recreation. Szechenyi is also located in Városliget (City Park) so there are many things to see and do there for everyone including superb places to eat. It was a fun day!

6 thoughts on ““Taking the Waters” in Budapest”