Last November I read a story in an airline magazine about an English language immersion program held at a resort in Spain. The program, “Pueblo Ingles,” takes place near La Alberca and is offered by Diverbo. The story stated that knowing Spanish wasn’t required for native English-speaking volunteers and that students from Spain were highly motivated to learn. Since I am presently living in Spain, I applied and was pleasantly surprised when I was offered the opportunity to participate in Pueblo Ingles number 1044. Recently, I met my colleagues and attended my first Pueblo Ingles! This post is about my adventure there.

Twenty-two adult students arrived for Pueblo Ingles from all over Spain. Motivated by a desire to learn, they were driven with an intense passion to improve their listening, comprehension, and expression in English. The improvement results that I observed were nothing less than amazing.

The eight-day Pueblo Ingles required perseverance by the students. It was similar to a “boot camp” facilitated by Diverbo’s superb, energetic on-site staff of two… Sabela and Jez. Every waking hour (often 15 or more) was orchestrated by the Diverbo team. Time was allotted to one to one sessions (between a student and an “Anglo” volunteer), specific subject group discussions, individual presentations, practicing teleconferences, mealtime conversation, theater skits, and evening social activities.

The Pueblo Ingles rule is that everyone is to speak only English during their entire stay. It was almost surreal that the moment that we stepped onto the bus in Madrid for the four hour trip to La Alberca, and until we returned at the end of the program, everyone’s utterances were only in English. Pueblo Ingles quickly became a multicultural experience for both students and volunteers. Not only did the students expanded their English skills at Pueblo Ingles but everyone also learned more about themselves and each other.

The twenty-three English-speaking volunteers came from all over the world. Joining me were native English speakers from several USA states, England, Ireland, Canada, Wales, and Malaysia.

“Anglo” volunteers paid for personal round-trip travel expenses to Madrid from / to “home.” In addition to their travel expenses, students (and sometimes their employers) also paid the Pueblo Ingles program fee.

The resort area is very attractive with snow-capped mountains and forests nearby. Walking trails with moss-lined stone walls retain their charm from centuries past. It was easy to envision medieval days with peasants tending to their animals and crops.

Superior Spanish-themed meals were provided at traditional eating times in Spain: 9:00 am, 2:00 pm and 9:00 pm. Pueblo Ingles lodging was in the resort’s rustic villas and almost all activities were held in the lodge and dining facility near them.

From the very beginning students and Anglos met as complete strangers and magic began. Both people listened to each other and communicated in English. The Anglos had the responsibility to ensure that he or she was understood and that the student’s words were correct in both context and pronunciation. It only took minutes and everyone moved beyond talking about their families, jobs and why they were at Pueblo Ingles. People soon were talking about everything… important and irrelevant, global and unique, dreams and fears, etc… Learning began to take place in the interactions between people who a few moments prior to meeting were complete strangers; and learning transcended English into learning about the value we have for each other. This value became visibly apparent with sad “good byes” at the close of our Pueblo Ingles experience.

One to one, 50 minute interactions were at the heart of Pueblo Ingles and every Anglo volunteer was able to interact with each student so the students heard the diversity of the ways English is spoken. The one to one discussions began from a specific phrase or words.  The Anglo explained the meaning of phrases such as “wear out,” “wear down,” or “burn the candle at both ends” which have meaning other than the specific words when translated. Soon students began to “think in English” and comprehend rather than translate words and phrases literally. Phrases like “hold your horses” and “paint the town,” which otherwise would have a confusing translation, became meaningful. It was visible when the phrases were understood by the students.

Phrases such as “break a leg” took on meaning for skits and theater performances by the students and Anglos. Enjoyed by everyone, they provided an entertaining way along with group problem solving activities to learn while acting, playing, and thinking in English. Student presentations will always be remembered each time someone hears something about “Drone Deliveries,” “MOOS” and many more. Each student prepared a presentation for an audience and honed it during several of their one to one sessions. Several Anglos also made presentations including topics such as: “London,” “Mindfulness” and BINGO.

Many students desired to learn how to better equip themselves to participate in teleconferences. I will never forget Azucena, one of the students, in the one in which I participated as a venture capitalist. I was stunned when she proposed (in crystal clear English) to obtain funding to “expand” her fictitious business for “hermetically sealed containers for use in submarines!”

At the end of each day everyone was exhausted from the learning experiences. The participation in the one to ones, discussions, presentations, skits, and conferences was more intense than I thought it would be, especially for the students. I don’t know where the students’ energy came from but the passionate desire to learn and develop was there everyday. 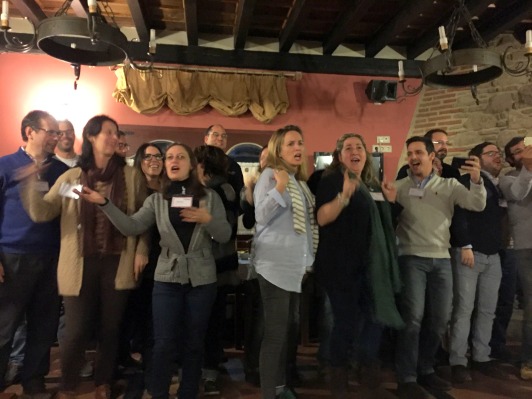 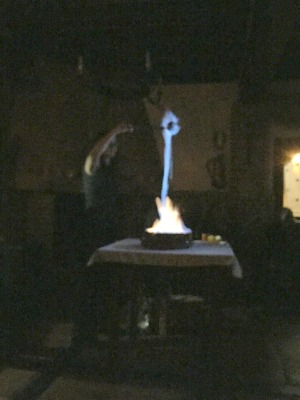 Following the 9:00 pm meal there were always social experiences. We participated in a Spanish tradition from the Galician region and drank the fire burnt “queimada” with the blue flame. Each group of people (the Spaniard students are pictured) sang a song (or two) chosen to represent their country of origin. Other than the Spaniards, we Americans were surprisingly the next largest group. We did a very good job singing a mashup of “American Pie” and “Yankee Doodle.” 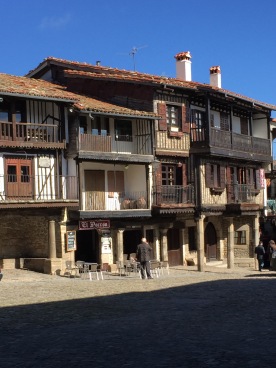 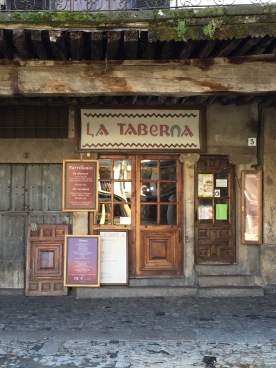 A tavern in La Alberca 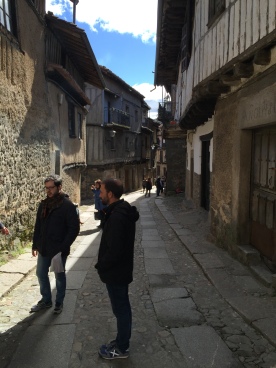 Waiting outside the Bodega

One morning we walked together to the medieval town La Alberca to view the architecture, and enjoy Iberian ham (that is made only from black Iberian pigs), cheese, and wine at the Bodega. Symbols of the Knights Templar and the Spanish Inquisition appear on two buildings. This Spanish community is very different from others I have visited in Spain in its architecture as seen in the photos from that visit.

In my blog entries, I often describe the beauty of the communities I have visited. However, for this post the real beauty is in the student perseverance and their accomplishments. My limited writing about the town of La Alberca is intentional to focus attention to what had been accomplished by the student participants.

Overall, Pueblo Ingles is a very challenging program for everyone but especially for the students who persevere without “free time” to do anything other than focus on their English listening, comprehension, and expression objectives. I certainly admire the students for their dedication, patience, and hard work toward achieving their English language goals.

Everyone will long remember our Pueblo Ingles, the work done there together, the joy and happiness, the sentiments, and the friendship bonds which the participants developed with each other.

Although I write my blog for myself, I also recognize that a growing number of people from all over the world are now following it. If you would like to receive my blogs in your email as I post them, please enter your address where indicated on the right side of this page. If you have a reply about my blog, please use the link at the top of this story to let me know.