Having lived in Andalusia in the southern part of Spain, I was aware of history of Phoenicians, Romans, Moors, historical events related to the Reconquest, etc…. I wasn’t quite sure what to expect when traveling north to the Galician city of Lugo.

Journeying all day by train, olive trees gave way to evergreens and flat land became more extreme with high hills, small snow-capped mountains, and very rocky terrain. My observations, although interesting, were not my motivation to go to Lugo, however.

I had learned about the 1700 year old, completely intact, Roman city wall constructed in Lugo. The wall is a UNESCO World Heritage Site and it was my principle attraction to the city.

Lugo was likely founded by Celts from central Europe and the area was named for Lugh, a Celtic god. When the Romans conquered the Iberian peninsula and the Lugo area in 13 BC, they established a military encampment at Lugo called Lucus Augusti.

During the third century AD the Romans constructed a huge, formidable defensive wall around Lucus and this is the heritage site seen today. Lugo’s defensive walls are the most complete and best preserved example of Roman military architecture in the Roman Empire.

This wall is not like one would see as a farm fence boundary. This stone engineering achievement varies in height from 10 to 15 meters (33 to 50 feet) and has a width of 4.2 to 7 meters (14 to 23 feet). It is 2.1 km in length that encircles the “old city.” It has 71 watch towers and today their lower parts are what remain. The top of the wall is wide and it is easy to envision that many soldiers could rapidly deploy to areas that would be attacked.

Wall into the Distance

As we know, the Roman Empire eventually ended but the wall has remained. As in other cities, during Medieval times people built homes and other structures onto the wall exterior. In more recent centuries, as European cities have expanded, they have removed their city walls. Fortunately for us, Lugo retained their wall, removed all structures attached to the exterior, and has taken steps for future preservation.

So this wall has become a tourist attraction for people to see, photograph, and, unlike most other artifacts, get close to and touch as you walk atop it. The residents use the wall  top to stroll and jog. It is a place young people go to flirt and is THE place for memorable first kisses and to watch others kissing! 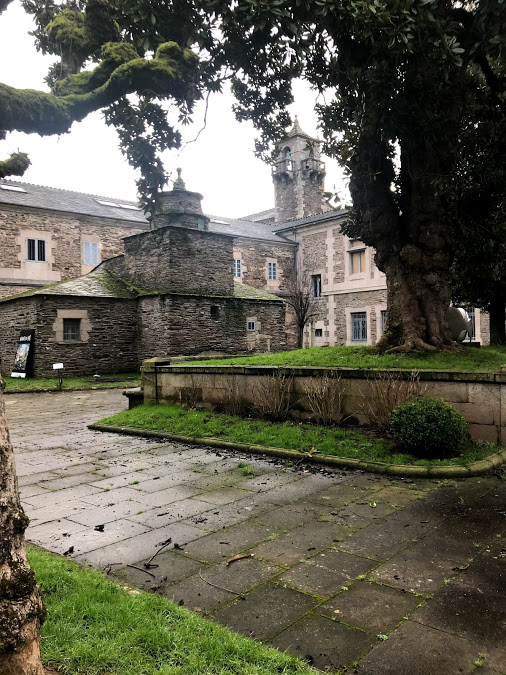 There is more to Lugo than the wall. But “old town” isn’t as preserved as many others in Europe. However, the Provincial Museum in Lugo has very good archeological artifacts (including mosaics) from the Roman period and Middle Ages. They also have wonderful paintings and jewelry from Galician artists from the 17th century to today.

Other notable places I visited in Lugo included the cathedral and several pictured plazas and buildings (in the photo slideshow) close to Rua Nova. It was interesting to me that interpretive signs in Lugo are often in Galician (a Romance language) in addition to Spanish and Portuguese.

The food in Lugo is highly influenced by its close location to the Atlantic Ocean. Seafood is exceptional. I did find a wonderful tiny bakery called “dona” that has excellent cappuccino and pastries with a lot of honey in them. I only stayed in Lugo three nights and I know that I missed seeing other Roman artifacts and more things from the Middle Ages.

4 thoughts on “My Roman Wall Exploration in Lugo, Galicia, España”